Since the accusation from Professor Ford, there have been many a proselytizing online from self-proclaimed feminist activists, self-righteous individuals shouting at the public through their Web accounts to “believe women.” At the time I’m writing this, there is a trending hashtag on Twitter, “#BelieveSurvivors.”

Judge Brett Kavanaugh of the United States Circuit Court of Appeals for the District of Columbia has been accused of a second instance of sexual misconduct.  This new allegation from Deborah Ramirez, a former classmate of Judge Kavanaugh, dates back to the 1983-84 academic school year at Yale University.

Regarding the first allegation from Professor Christine Ford (Palo Alto University) which dates back even further to Judge Kavanaugh’s high school academics in the 1980’s, the current university professor has agreed to testify before the U.S. Senate Judiciary Committee this coming Thursday after negotiations over the conditions of her appearance.

Since the accusation from Professor Ford, there have been many a proselytizing online from self-proclaimed feminist activists, self-righteous individuals shouting at the public through their Web accounts to “believe women.”  At the time I’m writing this, there is a trending hashtag on Twitter, “#BelieveSurvivors.”

This is the main problem with cases of sexual misconduct/harassment/assault: people are way too quick to run to the media in an emotional defense of the supposed victim defending themselves with the common objection, “why would someone lie about being assaulted?”  I don’t know why anyone would lie about being victimized.  I don’t know why anyone would rape or kill another person.

Ben Shapiro at The Daily Wire breaks down the flaws in Professor Ford’s story in an editorial:

“You don’t have to believe that Ford is lying to believe that these allegations require more substantiation.  Thirty-year-old events are difficult to reconstruct; memories change over time.  Witness testimony is notoriously unreliable in many cases.  And she could be telling the absolute objective truth, of course.”

Ryan Saavedra breaks down the flaws in Ramirez’s story in another editorial: 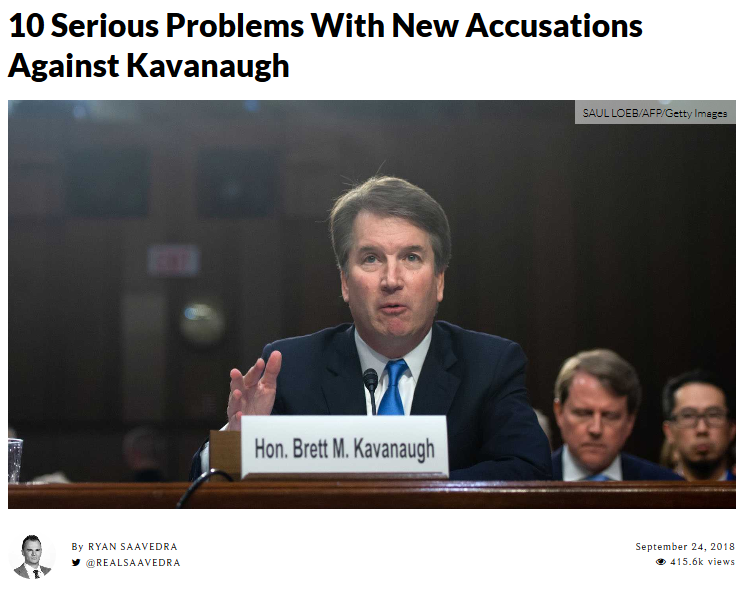 Maybe Professor Ford and Ramirez are telling the truth about Judge Kavanaugh, maybe the judge did act inappropriately on more than one occasion in his youth.  The alleged actions supposedly took place decades ago and the accusers have not provided very many details as to the time and place making an official investigation damn-near impossible.  Professor Ford says that she wants the Federal Bureau of Investigation (FBI) to investigate her alleged crime but we don’t even know if her alleged crime would fall under the FBI’s jurisdiction.

We don’t know the truth and, in the absence of the facts, we should not be taking any sides.  Taking sides in various media outlets will only serve to introduce needless bias into these cases.