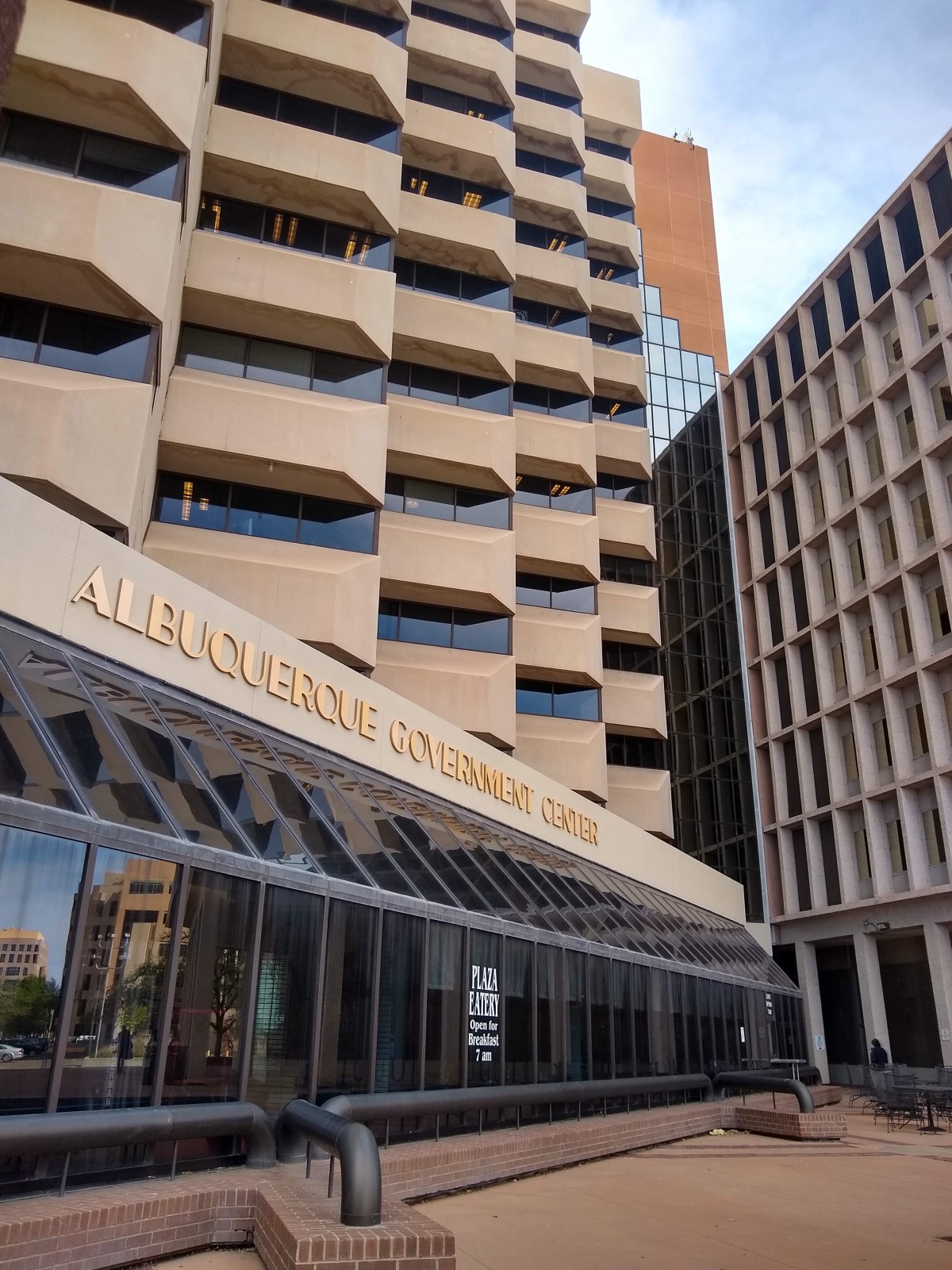 The Albuquerque City Council met with a full house of spectators last night, forty-one of those people signed up to speak publicly in front of the Council on a specific item agenda.  Councilor Cynthia Borrego was absent from the meeting which brought the quorum down to 8 from the full 9-member council.  The spotlight was on the Clean & Green Ordinance, a local measure to “pressure businesses (Councilor Pat Davis)” into transitioning to more environmentally-friendly consumer containers.

The ordinance was amended to a phased-in ban to take effect on 1/1/2020, rather than an immediate ban as a temporary reprieve for local businesses from the extra costs of transitioning away from cheap plastics.  In the meantime until January of 2020, plastic grocery bags and plastic straws will be available upon request of individual customers.  The ordinance was also amended to add a charge of ten cents onto customers asking for plastic bags as a way to encourage consumers to start transitioning to reusable containers.

Opposition to the ordinance came from the restaurant industry, specifically the New Mexico Restaurant Association, arguing that the current cost of transitioning from plastics would be to great on business owners and that consumer prices would inevitably increase as a consequence.  A counter-point to that argument was made by private citizens in favor of the ordinance, that the cost is already artificially low and that consumers should be paying more for the luxury of take-home containers.  A representative from the New Mexico Recycling Association also made an appearance to speak on behalf of the ordinance.

The proponents of the ordinance focused their arguments on the environmental impacts of plastic trash and claimed responsibility on governments to force the hand of businesses for the sake of the planet.  The counter-point to that argument focused on individual liberty and government over-reach, the responsibility of clean environments should be on individuals and businesses making better choices willingly rather than out of necessity.

The three Councilors who voted against the ordinance in the final vote were Councilors Brad Winter, Trudy Jones, and Don Harris.

Reuters reports on “six secret authorizations” from the United States Energy Secretary Rick Perry regarding the sale of nuclear technology to Saudi Arabia.

I’m not going to go into any details about how Saudi Arabia is an excessively authoritarian, theocratic monarchy that oppresses its people on a daily basis because anyone who pays attention to the news already understands that unfortunate situation (unless you’re also a power-hungry authoritarian who salivates over the kind of oppression that the House of Saud delivers daily). What frustrates me is the hypocrisy in American foreign policy. Why are so many power brokers so against the idea of our government making some peace with the government of Iran citing justifications like, “it’s a sponsor of terrorism,” or “it doesn’t align with American values,” but then those same psuedo-moralists will not make a sound when we deal with a government that does just that (state-sponsored terrorism). Can we at least have some consistency in our government policies? If we can’t deal with Iran because they are too authoritarian and they sponsor terrorism around the globe, then why the fuck are we dealing with the Saudis?

I suppose it’s all about those Arabian oil fields and, since the Arabs don’t like the Persians, the U.S. will continue to suck that big Arabian penis until the oil runs out.

The need to “secure our borders” is usually a hot topic for political campaigns. Unfortunately, fear too often accompanies the rhetoric around the topic. Too many politicians see the issue of immigration as simply a way to inflate their own egos by talking shit about foreigners as well as appeal to the very real human instinct to fear the unknown. The fear is understandable, it can be scary to think about people from a different country and culture coming into your own country – your own state – with values and customs that you don’t understand especially if the strangers are described using the harshest of words. There is an element of risk in meeting new people and its scary on an individual level as well as a collective level.

The great American cliche involves a “land of opportunity” and for many people over the past two centuries it was true. The United States experienced a surge of immigration from Europe and Asia through the latter 19th century into the 20th century during which time American citizens heard similar zenophobic rhetoric as we hear today and immigrants experienced similar prejudice because of rhetoric crafted to fuel fear. As with most groups of humans, some immigrants do not follow the laws of their new countries and they get punished by the respective justice systems as they are found out, but most immigrants have a very strong incentive to act as law-abiding residents, most immigrants are risking a lot in their own lives (sometimes life itself) to find a new place to call home and experience the same dignity through hard and meaningful work for which every human strives.

The liberalization of international trade as well as the stagnation of wages over the past few decades have created a situation across the globe in which large populations of humans are competing with other large populations of humans across vast regions for jobs just to supply themselves with basic necessities – laissez faire capitalism on a global scale. It is unrealistic and unsustainable over the long-term because large groups of humans throughout developing countries and even some of the developed world are now at the mercy of the bottom lines of a few mega corporations (corporations with more economic clout and political capital than some small countries). I’m imagining a future comprising of the combined nightmares of Upton Sinclair, George Orwell, and Philip K. Dick.

In order to combat this dystopian vision of humanity’s future where corporate executives have enough individual wealth and power to make the feudal lords of old salivate and government officials are basically prostitutes for private interests, I believe we need to renew an old conversation: what is the purpose of a government, what is an individual’s responsibility toward public interests, and what does a “social contract” entail? Immigration trends are responses to global economic trends, simply closing our borders to immigrants and refugees is not going to solve the root issue of economic inflation and stagnant wages. 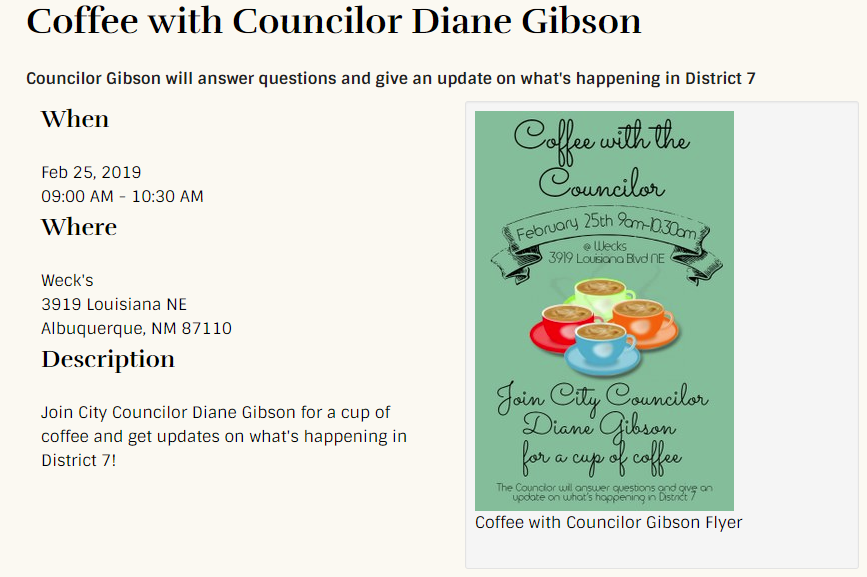 Albuquerque City Councilor Diane Gibson organizes a regular event in her district to meet with city residents (posted on the city website).  The meet-up this morning was a very cordial one of a couple dozen or so concerned citizens albeit the majority of attendees were senior citizens.

I was not disappointed about who was in attendance but rather about who was not in attendance; only a handful of faces in the crowd looked younger than 40.  It baffles me that most individuals from my own generation have no interest in prospecting their local political processes.  Although cynicism is understandable, it is not excusable.  Regardless of the overwhelming burden of political activism on an individual, it is still necessary to at least attempt to understand the issues happening around you and make an effort to exert your influence (no matter how small it may be) on the people elected/appointed to represent you.  Governments do not stop operating simply because you choose to bury your head in the sand.  In fact, averting your eyes from government processes will only ease the temptation toward corruption on government officials, a temptation that pulls on every human in a position of power.

The group discussion began with the possibility of a land bank for the City of Albuquerque, basically a method for the city to identify vacant lots and run-down structures to acquire and flip for productivity.  There was a majority support for this idea as a main concern throughout the meet-up was blight and property values.  I asked Councilor Gibson about this so-called land bank being used to identify vacant lots and dilapidated structures to be transformed into new public parks, she said public parks could be a possibility but the main focus was on acquiring old and vacant homes to flip on the housing market.  I also asked Councilor Gibson about how the Council could improve the city buses, she replied that she would like to see a larger fleet of buses to reduce wait times at bus stops.  Councilor Gibson joked that she would probably be long dead before we saw more bridges constructed across the Rio Grande so a larger fleet of buses is the next best thing to reduce traffic on the roads; she said that she is a ardent supporter of public transit.  The meeting ended with a vibrant discussion on how the city can “go green” regarding his consumption and energy use, it seems to be an issue on a lot of residents’ minds which is hopeful for the future.

It’s Monday so be sure to set a new goal for the new week and try and be a better than person than you were last week.  We all have our “bad days” but, if we tackle life just a little bit at a time, we can get through anything. 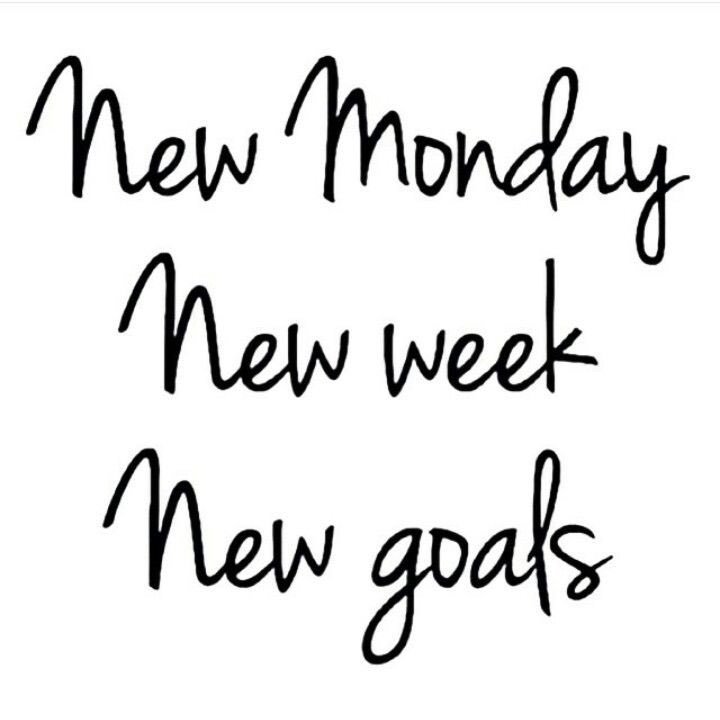 How often do you make contact with your local elected officials?  Do they make any effort to speak with voters regularly?

Yesterday, New Mexico’s House Commerce & Economic Development Committee discussed House Bill 31, the “Phased-In Minimum Wage Bill” and a lot of people traveled to the capital to express their opinions in-person to the committee (there were plenty of people for it as well as against it).

A curious citizen can view the recorded committee session here.

The restaurant industry sounds the like the most vocal demographic in opposition to HB31 and much of the criticism against the bill seems to be focused on the fact that the merging of the serving wage with the minimum wage will likely mean less tips for restaurant servers.  The loss of high earnings of tips for a successful restaurant server is an understandable fear but I think this fear misses the point of the bill.  The purpose of the bill is to create a living wage for all employees.

As of 2016, there are approximately 7.6 million individuals in the nation classed as “working poor” (working but still living below the poverty line), according to the United States Bureau of Labor Statistics.  Why should anyone be living in poverty while they are working full-time or near full-time?

A tip is not a mandated exchange from a customer to a server, it is a voluntary gift supposedly based on the merit of the server’s work and attitude toward the customer.  It’s true that an employer in the restaurant industry is required by New Mexico law to make up the difference in a lack of tips to bring a server’s earnings up to the minimum wage level, but then why have two different minimum wages at all?  Why not dispense with the server’s wage entirely?  I’m confused about the double standard.

Why is it acceptable for a restaurant owner to outsource the burden of waiter/server pay to the consumers?