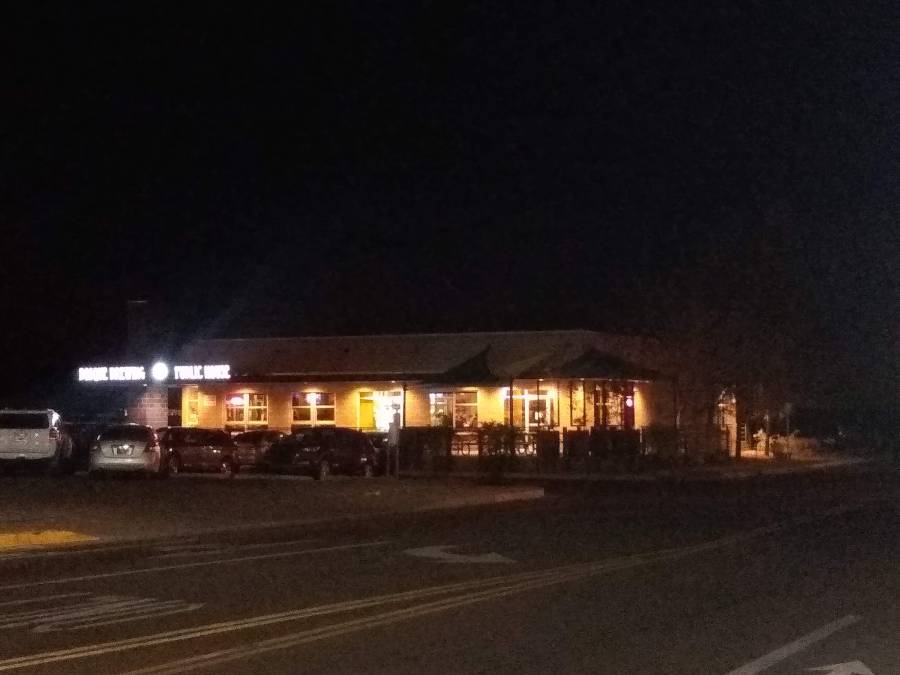 The Tractor Brewing Company is a mid-size taproom in the heart of Nob Hill, Albuquerque, down the street from the Nob Hill Business Center.  The establishment contains a wide, U-shaped bar for plenty of hoppers to get in and immediately go for a drink.  There is also a plethora of tables scattered around the periphery of the building that makes for cozy spaces to sit down with friends for an interesting night.  I sat at the bar as I do.

One look inside the beer menu and my eyes are drawn to the Double Plow Milk Stout which I order with some enthusiasm.  The bartender (or “beertender” as Tractor Brewing calls them) brings me a pint of the delicious dark brown elixir but, after the first sip, I feel underwhelmed.  The taste is okay for a stout but slightly bitter for my own taste.  It also is a dichotomy of flavors – through my nose, I detect a hint of chocolate flavor but, on my tongue, I only taste coffee.  This particular beer may not be for me.

A look at the specialty beers on the wall menu reveals another milk stout called Milk Mustachio Stout.  I may try that one next weekend.

I am willing to try Tractor Brewing again in the future but, at this current point in time, my favorite stout remains the Driftwood Oatmeal Stout from Bosque Brewing Company.

Albuquerque residents, what is your favorite local brewery?

“From the effective date of this 2019 act until July 1, 2022, an employer may pay a lower cash minimum wage rate pursuant to Subsection D of this section only if the employer can establish that for each week that an employee who customarily and regularly receives more than thirty dollars ($30.00) a month in tips works, the sum of the employee’s tips combined with the employer’s cashwage is not less than the minimum wage rate as provided inSubsection A of this section (NM Representative Miguel Garcia, NM Legislature, 2019).”

I think it’s logical for restaurant servers to react defensively to this bill as it was originally written but I think that reaction is based in an understanding that helps their employers take advantage of them.  As I’ve stated in previous postings here, a tip from a customer in any industry is not mandatory.  Even if a server demands a tip, the customer is not legal bound to provide one.  It is simply an expression of good faith on the part of the consumer toward the business worker.  I don’t believe that any worker’s pay check should be contingent upon the potential good faith of particular consumers.  All of the responsibility of worker pay should be on the business.  A separate “serving wage” for food servers creates a minimum wage double standard between the food service industry and every other industry and it is exploited by businesses whose bottom line is higher profits.

“You have the possibility for more money through tips so I’m going to pay you less than the standard minimum for every other industry.”

^ That is the logic behind this double standard, it essentially outsources responsibility to the workers themselves forcing them to become entertainers as well as food servers, begging for tips because they get paid less than other workers.

Customers in any food establishment should not be expected to supplement the wages of the servers and they definitely should not be guilt-tripped into giving a larger tip out of sympathy.  Businesses should pay food servers the same minimum wage as every other industry as well as let servers keep all the tips they earn from customers.

Yesterday, New Mexico’s House Commerce & Economic Development Committee discussed House Bill 31, the “Phased-In Minimum Wage Bill” and a lot of people traveled to the capital to express their opinions in-person to the committee (there were plenty of people for it as well as against it).

A curious citizen can view the recorded committee session here.

The restaurant industry sounds the like the most vocal demographic in opposition to HB31 and much of the criticism against the bill seems to be focused on the fact that the merging of the serving wage with the minimum wage will likely mean less tips for restaurant servers.  The loss of high earnings of tips for a successful restaurant server is an understandable fear but I think this fear misses the point of the bill.  The purpose of the bill is to create a living wage for all employees.

As of 2016, there are approximately 7.6 million individuals in the nation classed as “working poor” (working but still living below the poverty line), according to the United States Bureau of Labor Statistics.  Why should anyone be living in poverty while they are working full-time or near full-time?

A tip is not a mandated exchange from a customer to a server, it is a voluntary gift supposedly based on the merit of the server’s work and attitude toward the customer.  It’s true that an employer in the restaurant industry is required by New Mexico law to make up the difference in a lack of tips to bring a server’s earnings up to the minimum wage level, but then why have two different minimum wages at all?  Why not dispense with the server’s wage entirely?  I’m confused about the double standard.

Why is it acceptable for a restaurant owner to outsource the burden of waiter/server pay to the consumers?

A few blocks away from my current place of residence there is a restaurant/bar called the Lava Rock Brewery, a fine establishment with filling food and hearty drinks that I would recommend to friends. Located on Unser Boulevard in west Albuquerque (north of Ladera), the brewery is in a relatively high-trafficked area of the city and within walking distance of several dense neighborhoods.

I walked to the brewery from my apartment near the Ladera golf course and ordered their “Killer Sandwich” – grilled chicken with slices of a tomato and a red onion and guacamole-smear – served with a pickle spear and French (I don’t think the food item colloquially known as French fries actually originated in France) fries. The food arrived at my spot at the bar within 15 minutes and, upon its delivery, I ordered a pint of Chocolate Milk Stout which I received immediately (after displaying my driver’s licence, of course). My review of Boxing Bear Brewing Company’s Chocolate Milk Stout is live here.

The food was well-presented on its plate and the restaurant looked clean and well-organized with a window into a back room where one could see a cook finalizing each order for the waiters. The building is spacious enough and I did not feel cramped or claustrophobic at all during my stay. The sandwich was not as large as I would have preferred but it was just as filling (most likely from the chicken and guacamole).

If you enjoy classic American fried food and craft beer, the Lava Rock Brewery is definitely worth checking out.