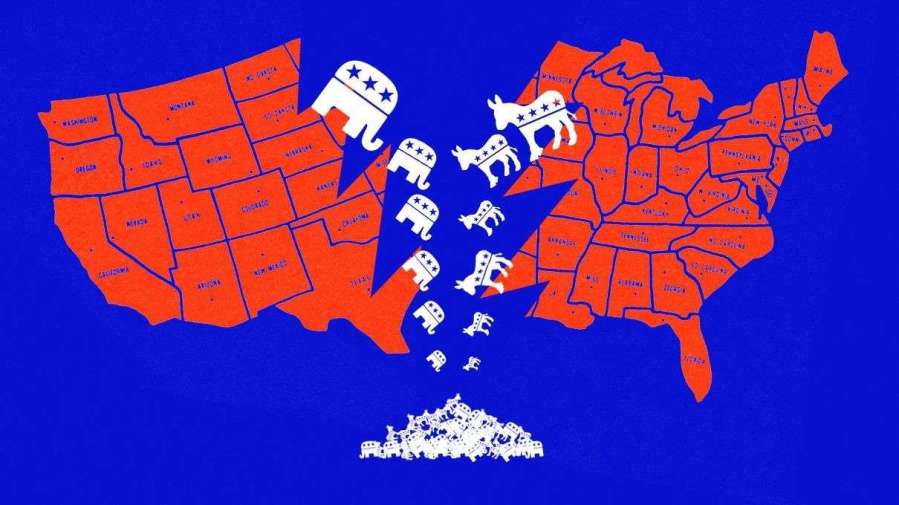 Today, members of the Capitol Police give testimony (Live Coverage: House Panel Holds First Hearing on Jan. 6 Probe, The Hill Staff, 7/27/2021) in the House of Representatives regarding their experience during the insurrection that occurred on January sixth of this year. Their recollections from that day are vivid and horrifying, they even describe the insurrectionists as domestic terrorists (which I think is an honest description). I think any reasonable person would describe the events of January 6, 2021, as nothing short of a rebellion against the United States government. However, there are still people who would describe the rebels as American patriots while describing the police officers as traitors.

How did Americans become this polarized?

The two majority political parties have seen growing polarization over the past two decades with over a third of voters from each of the parties showing stark (Staff Report, Pew Research, 2021) differences in political opinions. The linked article above shows differences in opinions on voting rights, an arguably staple issue. Only 38% of Republican Party voters favor automatic voter registration of American adults compared to 82% of Democratic Party voters; the same percentage of Republican Party voters are in favor of early voting compared to 84% of Democratic Party voters. Support for differing positions is growing more and more stark within each party.

I think this polarization is tied to two different phenomena in 21st century America. First, the balkanized news media ecosystem in which we find ourselves swimming amid the many electronics screens that dominate our households. We have so many choices of news and commentary channels that we are increasingly retreating into our own ideological bubbles and shutting out any opposing view points. It’s imperative that individuals make efforts to search for sources of information outside of their own ideology (assuming self-awareness of one’s own ideology which can also be difficult to achieve).

The elimination of the Fairness Doctrine (WikiPedia, accessed 7/27/2021) is another contributing factor to political polarization. Repealed in 1987, the Fairness Doctrine (Victor Pickard, The Washington Post, 2021) mandated radio and television broadcasters to present opposing views of allegedly controversial issues to the American public operating under the justification that, because there were so few news broadcasters, a mandate was required to maintain a diversity of opinions (correctly assuming that news media has an significant impact on the political opinions of American voters). The conservative argument to this in the era of digital media is that there are so many outlets for news & commentary today that a government mandate on media organizations is no longer necessary. However, this assumption fails to explain how a handful of companies control (Ashley Lutz, Business Insider, 2012) the legacy media (established news sources like CBS, NBC, CNN, Fox News, etc.). The fact that more Americans are capable of accessing a plethora of news stations today is beside the point of contention regarding who owns most of those news stations. The digital era presents Americans with more opportunities in news but most of the money still resides with legacy media (not to mention the political parties that influence respective news stations with their war chests). In other words, the laissez faire argument falls flat as usual – Americans cannot rely on private organizations to police themselves or forgo opportunities for profit in pursuit of a public interest. There is also the issue surrounding the advent of digital social media. Platforms like YouTube and Facebook have become primary players in so-called alternative news media but they are technically not broadcaster themselves, not subject to traditional regulations over periodic content.

The second phenomenon that has fueled polarization is the growing influence of money in political processes. American elections have been growing more expensive through our history. Since the start of this century, every national congressional and presidential election has topped (OpenSecrets, accessed 7/27/2021) billions of dollars. A specific Supreme Court case (Citizens United v. Federal Election Commission, Oyez, accessed July 27, 2021) has only exacerbated the issue with election spending growing exponentially since 2010. Concern over large financial interests in elections is nothing new. The first attempt to regulate financial expenditures on elections was the Tillman Act of 1907 (WikiPedia, accessed 7/27/2021). The act, signed by President Theodore Roosevelt prohibited corporations from spending money from their own treasuries on specific election campaigns. Obviously, the Supreme Court of the United States has taken the nation in a different direction since then. Today, independent organizations can spend unlimited amounts of money advocating for a specific political candidate which ensures that people with more money are able to crowd the media air waves with advertisements, effectively shutting out less fortunate voices. I think advocacy for limits on campaign spending by independent organizations could be argued for using the Equal Protection Clause as justification but I’m not a lawyer.

The corrupting influence (OpenSecrets, accessed 7/27/2021) of capitalism on democratic-republicanism is obvious at this point in our history. Donations of $2,500 or more from individual people (large donations) make up the bulk of expenditures to political candidates, donations $200 or less (small donations) make up barely over 10% of all political expenditures. Health insurance companies, for instance, donate (OpenSecrets, accessed 7/27/2021) millions of dollars every cycle to political campaigns. This fact could be one factor in why the United States is the only industrialized country on the planet that does not guarantee a universal healthcare policy to its citizens despite a majority (Bradley Jones, Pew Research, 2020) of Americans supporting universal healthcare.

The high costs of elections coupled with the overwhelming influence of money in politics has led to a majority of Americans abdicating the civic responsibility of voting (Drew Desilver, Pew Research, 2020) under the justification that votes do not matter as much as in past generations, leaving the democratic to the more ideologically charged activists who are less likely to make strategic compromises with their political opponents. The 2016 elections saw 56% of the voting population turning up on Election Day – that percentage was a slight increase from 2012 but lower than the record year of 2008 when 58% of voters cast a ballot. It’s easy to cast blame onto these apathetic citizens, shrugging them off as lazy and irresponsible, but I think the more significant question is why these citizens feel so disconnected from their own government – from their democratic process. Half the nation feels so disconnected from democracy – from the republic – they don’t know where to turn to make their voice heard and, when large groups of people feel disenchanted, disaffected, and desperate, violence is more common.