Do we really need a televised “State of the Union” address?

At the beginning of every year, Americans choose whether or not tune into the “State of the Union” address delivered by the current president, whom is treated like royalty with grandstanding applause at his every vague word. The past five presidents can sum up one S.O.T.U. in one sentence: the state of the union is shit. Of course, a politician has to keep up a facade for the American public so no one becomes too alarmed.

President Donald Trump’s latest S.O.T.U. address last night was particularly useless because it’s President Trump – an excessively selfish, misogynistic, corporatist, baffoon who was born with a silver spoon in his mouth. Does this guy really understand the current state of our democratic-republic? 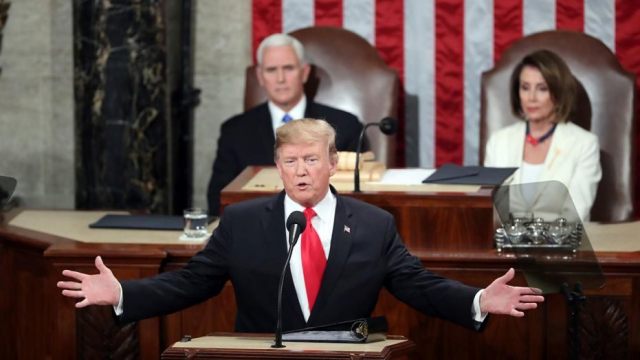 The S.O.T.U. is a partisan sporting event for American politicians. Regardless of who is the President, the two parties with the most political market share use the event to throw miniscule rhetorical punches at each other, distracting the public with their charade of modern tribalism. All the while, their corporate puppet masters make back room deals to fuck over the average American with neo-liberal economics and an imperialist agenda. That’s what American politics has become: charades and back room deals.

President Trump campaigned on pseudo-populist rhetoric which was successful against an obvious corporatist who had been in politics her entire life and who’d flip-flopped on issues more times than anyone could count. Though, once in Office, Trump proved himself even more of a phony. He doesn’t care about working Americans given his cabinet picks (a former oil lobbyist for the position of Interior Secretary?), he only cares about his own ego.

I’m also a selfish person but I have no plans to run for a public office, I would hate that kind of job.

A look into history.

While the nation’s first two presidents felt it necessary to deliver a speech to the national Congress, President Thomas Jefferson disagreed with that assumption. President Jefferson believed a physical speech to Congress was not necessary and a public event idolizing the presidency seemed to monarchial, antithectical to the nation’s democratic ideal. Instead of a physical speech, President Jefferson simply wrote a letter to the Congress in which he laid out budget reports for his agenda (no grandstanding public appeals) and that tradition was followed until President Woodrow Wilson revived public addresses in 1913.

I think two inventions transformed political theatre in the negative during the 20th century: the radio and the television. Ultimately, the radio and the television (more so with television) placed more emphasis on public appearances and optics rather than the specifics of policies. Americans began turning to what a candidates looked like and what he appeared to do rather than what a candidate actually was, Presidents John Kennedy and Ronald Reagan are examples of this public obsession with appearances. Both Kennedy and Reagan were praised for their on-camera talents while their less favorable actions regarding policy stayed out of the spotlight.

How can Americans return to a policy-focused culture shying away from appearances and optics?